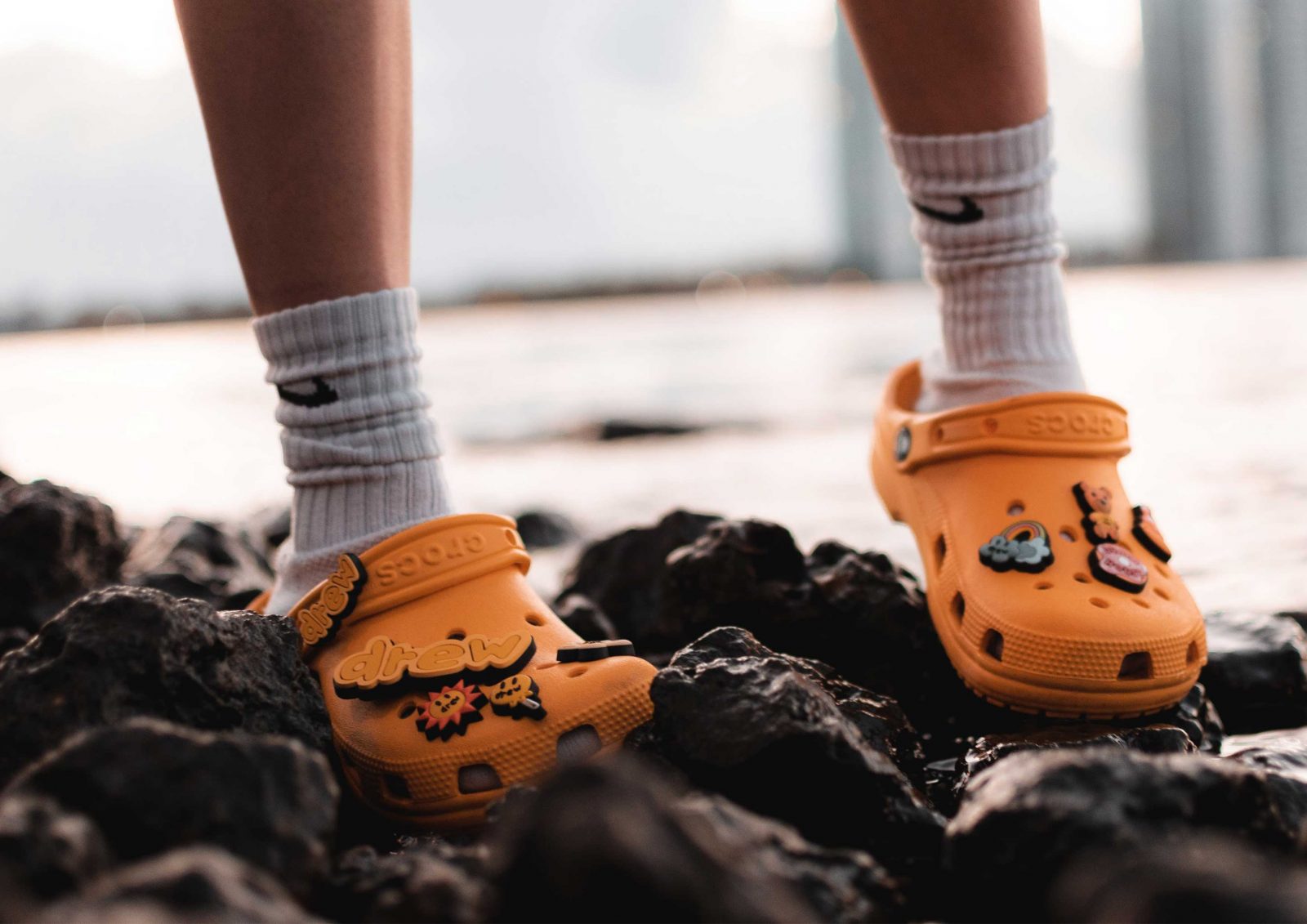 Has there ever been a fashion comeback as compelling as Crocs’? After being dubbed the “ugliest shoes” in the world by many fashion critics – with Victoria Beckham even saying she’d “rather die” than wear them – Crocs is now an “It” brand for fashionistas across the globe.And there are too many crocs collabs with popular brands. As of January 2021, Crocs sales hit a record $1.38 billion in a single year. And this year, forecasts are predicting a 55% profit increase.

Though the foam clogs have always garnered their fair share of column inches over the years, the massive growth enjoyed these past few years is credited to Clogs’ disruptive collaborations. Ranging from heeled pairs to survival clogs, here are some of the most noteworthy Crocs collabs so far: 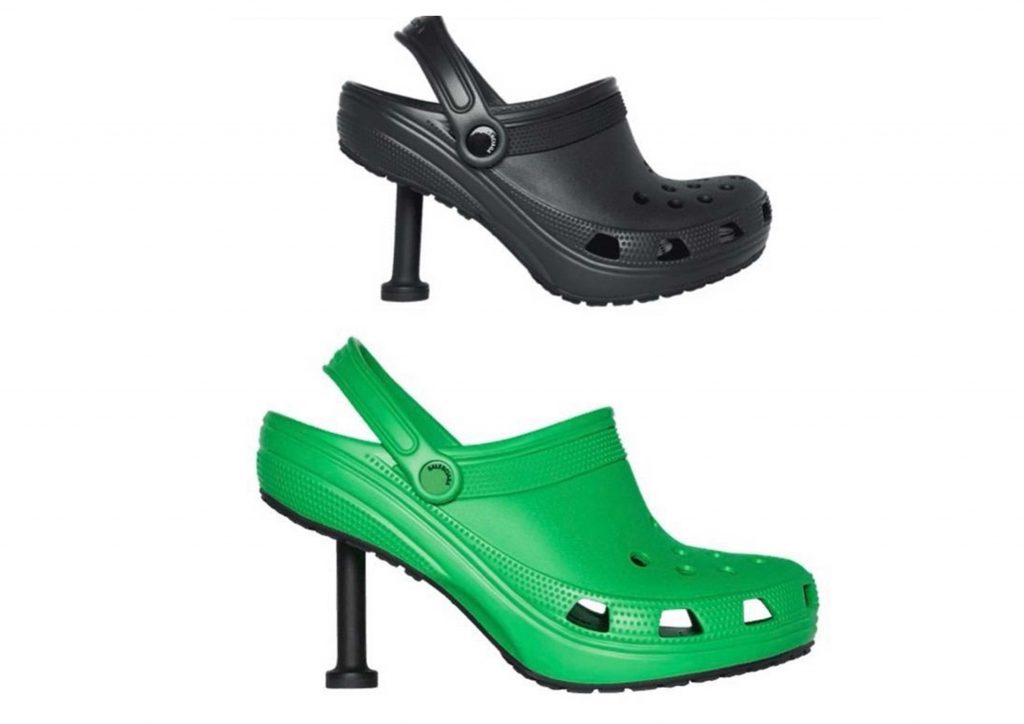 To fairness to the luxury fashion house Balenciaga they were ahead of the curve when it came to Crocs. In 2017, the Spanish brand had already released their platform Crocs collaboration. Despite featuring an insanely chunky heel, the $850 clogs sold out during the pre-release. This year, they’re slimming down the Balenciaga Crocs 2.0 silhouette with a stiletto heel. The heel itself looks more like a dart than the skinny blade that stilettos are named after. But that’s part of the industrial vibe showcased by the $1,000 clog-high heel hybrid. 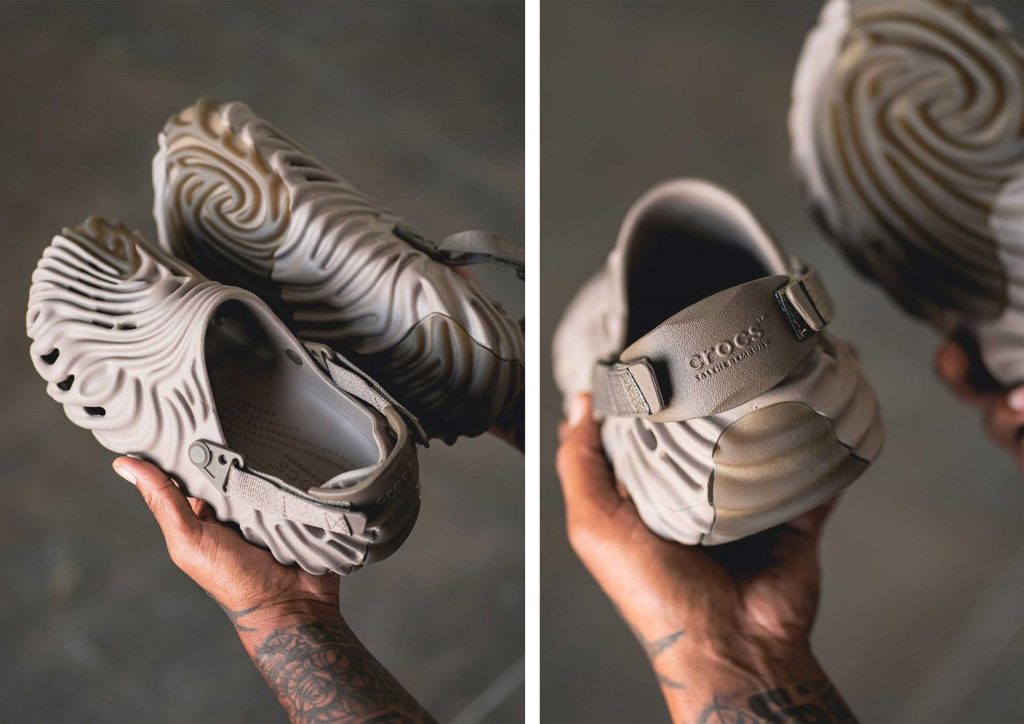 As one of the most celebrated names in contemporary fashion, former Versace vice president of sneakers and men’s footwear Salehe Bembury knows a few things about scene-stealing shoes. After all, he’s also the mastermind behind Cole Haan’s LunarGrand, and YEEZY’s Boost 350 v2 and Boost 750. This year, the New York native announced his collaboration with Crocs. The official Salehe Bembury Design will come in tonal sand and tonal green colorways. And also feature a swirling texture that wraps around the entire exterior. Though the release date for these clogs is in December, there’s no doubt it’ll be another sell out.

If you thought Jibbitz – those removable 3D charms from Crocs – were bulky, then wait until you see what upcycling and fashion DIY influencer Nicole McLaughlin includes in her Crocs collaboration. Known for her sustainable fashion ethos, the designer teamed up with Crocs for the Campsite Classic Clog release, which is meant to take functional and comfortable outdoor shoes to the next level. Aside from the stuff sack ankle covering, each clog also comes with survival gear, including a carabiner, a paracord, a compass, and a pouch.

Despite being one of the more “subdued” Crocs collabs, the Alife x Crocs line is still a show stopper. Made before the socks and sandals trend went mainstream, streetwear brand Alife released a version of the clogs with built-in tube socks. Thanks to its pure white color and minimal branding. This edition (called “Sport”) wasn’t expected to make such a massive statement. But the design is still subtle enough for minimalist dressers. In a previous post on ‘The Essentials of Minimalist Style’, the article mentioned how capsule wardrobes with neutral tones are among the main principles of the minimalist aesthetic. And because the socks provide extra cushioning and warmth, this Alife x Crocs collab is versatile enough to earn a place in even the most discerning capsule wardrobes.

The considerable number of Crocs collabs on the consumer market may seem overwhelming. But it shows no signs of slowing down as demand continues. To avoid becoming a fashion polluter, though, the Crocs brand has promised to be transparent about their low carbon emissions – which Fashionable Clothing suggests is one of the best ways to keep fashion sustainable – and aims to have zero emissions by 2030. Until then, Crocs vows to keep delivering collaborations with a minimal ecological footprint. But with maximum impact when it comes to style!