All About 90s Shoes and 90’s Movies’ Iconic Shoes

90s fashion continues to affect us in every period of our lives. In fact, we can see these effects mostly through clothes. 90s accessories can maintain almost the same effect. In addition to these, the 90s shoes still contain models that everyone loves fondly. In this article, you will be able to examine the 90s fashion in the shoe category. Also, in this article, you will find the answer to the question “What shoes were in style in the 90s?” which I think will be quite fun.

If you want to get more information about the 90’s Era, you should definitely check other related articles:

What shoes were popular in the 90s?

What shoes did they wear in the 90s? That’s the question! There are many models of shoes that were popular in the 90s. Before I start the detailed review, I have listed these popular shoes for you. In this list, I divided shoes into several groups such as summer shoes, winter shoes, and daily use shoes (sneakers). Let’s examine all of them!

I think the summer season includes the most beautiful days of the whole year. It’s really nice to sit in a cafe with a cold coffee, even if I’m not doing anything in the hot weather. In addition, what about holidays? They are also one of the most beautiful times that includes sea, sand and enjoyable activities. One of the biggest things that accompany us in these beautiful times is our clothes and shoes. Comfortable clothes and comfortable sandals or slippers can be a savior! 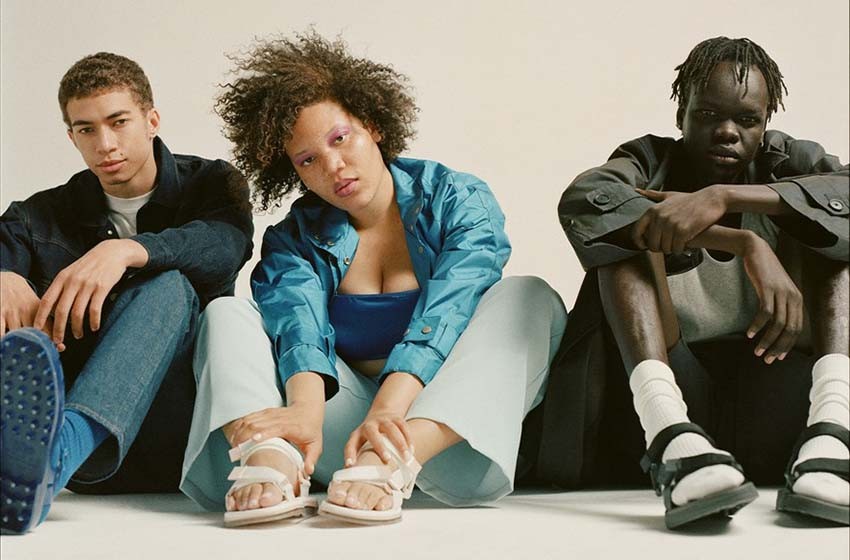 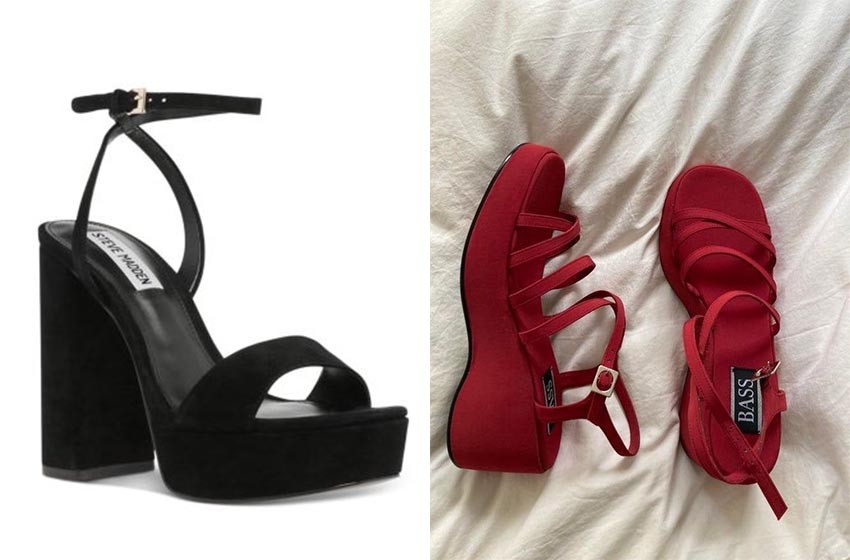 Secondly, the other shoe that will examined is flip flops. Flip-flops are perhaps one of the most used shoes in summer. Flip-flops are a shoe model found in every age of fashion, as they are both easy to wear because they do not have heels and are comfortable. You can see flip-flops used frequently in the series of the 90s.

For example, if you take a look at Rachel in “Friends”, the “10 Things I Hate About You” poster, or Gwen Stefani from the ’90s, you’ll see 90s-style shoes or flip-flops.

Jelly shoes are also among the popular models of the 90s footwear. Generally, it has a transparent, glittery, and basket-woven structure. Also, almost everyone has had jelly shoes at one time or another. I had one pair too and it exactly looked like the gray one from the right side.

In addition, contrary to the classic look of jelly shoes, there are more ornate models. The green jelly shoes you see in the photo look great with socks! Another one, the pink model, would be a shoe that I would definitely prefer. 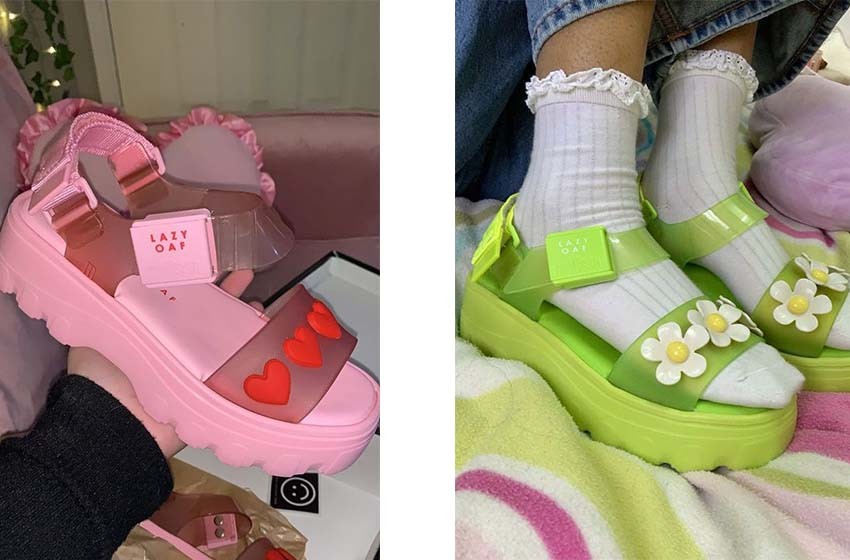 Moreover, there is no one who does not know the “Adidas slides” model, which is the most classic slipper of Adidas. Adidas slides, which is one of the 1990s shoes look good when worn with socks.

Birkenstock is a brand that pioneered the indispensable slipper models of both today’s and the 90s shoes category. Especially the open-front model was a slipper that everyone wore in the 90s. In fact, according to my research, supermodels wore Birkenstock slippers in the Marc Jacobs for the Perry Ellis grunge show in 1993. You can see two photos from this fashion show below.

In addition, these slippers are also available in a closed-front model. Among the 90s shoes, this model was also very popular.

According to my research, Steve Madden was branded in 1990. It has quickly become one of the most iconic brands in footwear. In the 90s, these wedge-heeled Steve Madden slippers were combined with long skirts.

The opposite of summer shoes, of course, are winter shoes! I always like to wear boots in winter. I believe that the coat and the boots go very well with each other. Models that are still very popular today were popular in the 90s. Some of those; are combat boots, kitten-heeled boots, patent-leather boots, doc martens, platform boots, knee-high boots, and square-toe boots. We will examine some of them under this topic. So what do you think? Which type of boot is your favorite?

Firstly, I will start with one of the most classic models of the 90s shoes. Combat boots! These combat boots are actually one of the grunge fashion items. Thanks to many celebrities, it is possible to say that it is popular again today.

Also, speaking of combat boots, there is a brand that should definitely be mentioned. Dr Martens! Doc Martens boots were highly preferred among the 90s shoe models.

Another model among the 90s shoes is these platform boots! In fact, these boots are not suitable for daily use. But it can be a good idea for a stage costume for celebrities.

Moreover, I remember very well how fashionable square toe boots were. Even when I was little, I used to think about how stylish my mom’s square-toe shoes looked. I still think that square toe boots may be the shoes with the most original model among the styles of 90s shoes. And now square toe boots are back! By doing a little research, you can find both square-toe boots, square-toe heels, and square-toe sandals almost everywhere.

Sports shoes are the most important part of our combinations in daily life. I almost always prefer sneakers in daily life because sneakers are very comfortable. It is also possible to find a suitable model for every foot. You just need to know your shoe size. 90s basketball shoes were also diverse and pretty cool!

Firstly, I can say that chunky shoes were shoes we could see on everyone’s feet in the 90s. These shoes have a big and rough look, but when you choose the right model, you will definitely have a shoe you can’t take off!

As you can see in the first photo, Lady Diana used to use chunky shoes a lot in her outfits. Chunky shoes look absolutely amazing, especially in sports and sports-chic outfits. You can make extremely stylish outfits with just biker’s shorts and a sweatshirt like Lady Diana.

Platform sneakers are, of course, a part of the 90s shoe fashion. The most distinctive feature of these shoes is that they have a huge shoe sole. As you can see in the photo, it looks rough and big, just like the chunky shoes. But I think aesthetically, they do not have a stylish and eye-pleasing pattern as chunky shoes.

Although Converse is not suitable for cold weather, it is still an indispensable model for everyone. It was a very popular shoe, especially in the 90s shoes. Over time, we have witnessed that many artists wear Converse, even to elegant parties. This made it a “shoes of every outfit” shoe. 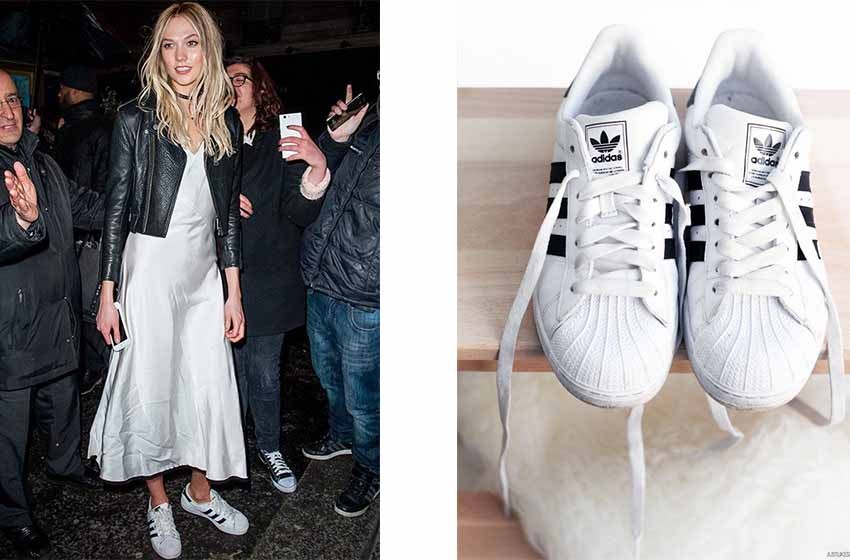 Furthermore, the Nike Air Max 95 was among the iconic 90s Nike shoes of its time. The shoes, which are now among the icons of today, continue to be preferred again as in the 90s.

I can say that it looks like chunky shoes in appearance. I’m sure the Nike Air Max 95 will make your body look great with long socks and a pair of jeans.

The Reebok brand also has 90s-inspired shoe models that everyone is familiar with. Flat sole and white color of Reebok shoes are mostly preferred. You can also take a look at these models from the photos below.

You may be thinking “So how am I going to combine all these shoes?”. For such a question, I suggest you take a look at the article All About 90s Outfits. This article has everything about the ’90s, from clothes to accessories, from makeup to hair. Also, 90’s movies, TV series, and celebrities are in this article.

I can say that classic and fun shoes, which is the last topic I review shoes, are actually 90’s shoes that I can’t determine the category of. Despite this confusion, this is my favorite title! You should definitely read this category, which is very entertaining and contains information that you can share with your friends.

Firstly, according to my research online, “Mary Janes” shoes were actually called “bar” shoes in the late 19th and early 20th centuries. Also, these shoes are mostly preferred for children. Especially boys often wore these shoes more than girls back then.

Later, in 1904, this situation changed. Back then, there was a cartoon character named Buster Brown who wore these “bar” shoes, and this character had a girlfriend named Mary Jane. The Brown Shoe Company in Missouri changed the name of the “bar” shoes to “Mary Janes” after this cartoon.

I also found some fun fashion facts about Mary Janes shoes. Mary Janes shoes are thought to pair very well with the 1920s fashion “Flapper Dress”. Also, in the movie “Baby Takes a Bow” released in 1934, Shirley Temple wore white Mary Janes shoes. You can see the details in the photos below.

Secondly, how about going deeper into the 90’s shoes? If your answer yes, there is something I just learned that I can share with you. Moon Shoes! Maybe you were a ’90s kid and you already knew these moon shoes, but for me, it was a piece of pleasant new information to learn. According to my research on the internet, moon shoes are shoes made with trampoline-like springs. Their slogan is “mini trampoline for your feet”. Pretty cool, right?

In the video below, there is a video called “Trying 90’s MOON SHOES”. In this video, you can watch the advertisement of the moon shoes shot in the 90s and watch the person trying these moon shoes.

In this section, we’re going to review a few movies and the iconic ’90s shoes in those movies. First of all, I would like to say that I did not know that shoes were so important to movies. However, as a result of my research, I even learned that some shoes are specially designed for movies. In particular, the Nike brand has succeeded very well in advertising itself in many films.

Forrest Gump, the movie that everyone I know finds very sincere and loved, is a 1994 movie. In the movie, Jenny, the girl Forrest loves, presents Forrest with a pair of white and red Nike Cortez. Forrest has been running heartbroken across the United States for three years in these Nike Cortez shoes after Jenny disappeared.

90s Shoes From Back To The Future Movie

Tinker Hatfield, the designer of Nike Inc., was asked to design a shoe for the second movie set in the future after the first movie in the Back to the Future series. Hatfield designed a shoe with light-up panels and features such as self-fastening laces.

The Basketball Diaries is a 1995 90’s movie. Leonardo Di Caprio plays one of the successful players on the high school basketball team named Jim in this movie. He dreams of playing for the national team and becoming a basketball star are replaced by crime, misery, and twisted relationships when he meets drugs. In this movie, you can see Leonardo Di Caprio is often wearing Converse Chuck Taylor All-Star Core Hi sneakers.

Kill Bill is a 2003 Quentin Tarantino movie. Since it is the early 2000s, it is still possible to talk about the 90s effect. In this movie, Tarantino pays homage to Bruce Lee’s iconic yellow-and-black fight suit and the Onitsuka Tigers. Also in this movie, we can see Onitsuka Tiger Tai Chi LE shoes. I’ve included a video below that presents a short excerpt from the movie. If you watch the video carefully, you can also see the “Fuck U” text on the bottom of the Onitsuka Tiger Tai Chi LE shoes. Pretty cool!

If you think, “That’s enough about 90s fashion”, the article All About 2000s Fashion will definitely take you to another fashion world. We have come to the end of what can be said about ’90s shoes! I hope you enjoyed and benefited from this article. In addition, you can also browse this site for more inspriation!

References for the Images